The PANDEMIC 7 YEAR ANNIVERSARY BASH is only a few weeks away and to celebrate we are bringing in our old friend JORO BORO, printing brand new T shirts to give away, and even putting together a mix cd of some our favorite stompers.

As you may or may not know PANDEMIC started back in the fall of 2005 as an experiment between three musicians in three different bands (Centipede Eest, The New Alcindors, and Air Guitar Magazine) that shared a practice space in a downtown warehouse.  The idea was forming but what we needed was a venue, something new, something different.. A new bar opened bar in the east end called the BRILLOBOX and on a whim we approached the owners with this idea. They agreed to let us use the upstairs space for whatever the hell we were attempting to do.  They didn’t know and we sure as hell didn’t know, but somehow we are still here 7 Years later.

I think originally the terms we used to describe PANDEMIC were “Weird World Music” and “Bastard Ethnomusicology.” They fit at the time, but didn’t quite do us justice. Nothing really seemed to fit.  Our sets were mishmashed.  Beatmatching Rhythms and time signatures were immediately thrown out the window.  We were playing tracks from all over the world from lo-fi cassettes, to bootleg cds, and terrible mp3 downloads. We slammed genres of music (defined and undefined) against one another in a way that would make most dj’s yack.  A Gypsy Brass cocek followed by Bhangra track, followed by a Peruvian Psychedelic Cumbia, next into a Ghanaian Afrobeat. An Arabic Rai’nB  track followed by South African House, followed by a 70’s Thai Disco.  It didn’t make any sense and it made perfect sense. I hadn’t experienced anything like it until I played a show at this strange little bar in Chinatown (NYC) called Mehanata (Bulgarian Bar). But there the dj’s weren’t distasteful like we were. We were brutal with our mixing and our song selection.  There the dj’s had their own thing, but that’s a whole other story…..

I have yet to hear anyone describe it better.

I”d like to thank JUSTIN HOPPER and CAULEN KRESS as well as the staff at the Brillobox for their hospitality and hard work. I’d also like to thank Joro Boro, Spat, Sara Vicious, Stefan “the Mad Serb”, Edgar Um, Paul K, Andalalucha, and everyone else who has guest dj’ed. And to those who have attended our parties and/or continue to come out. And thanks to our newer partners VIA and El Gallo.

Now i have to go make my little girl pancakes. 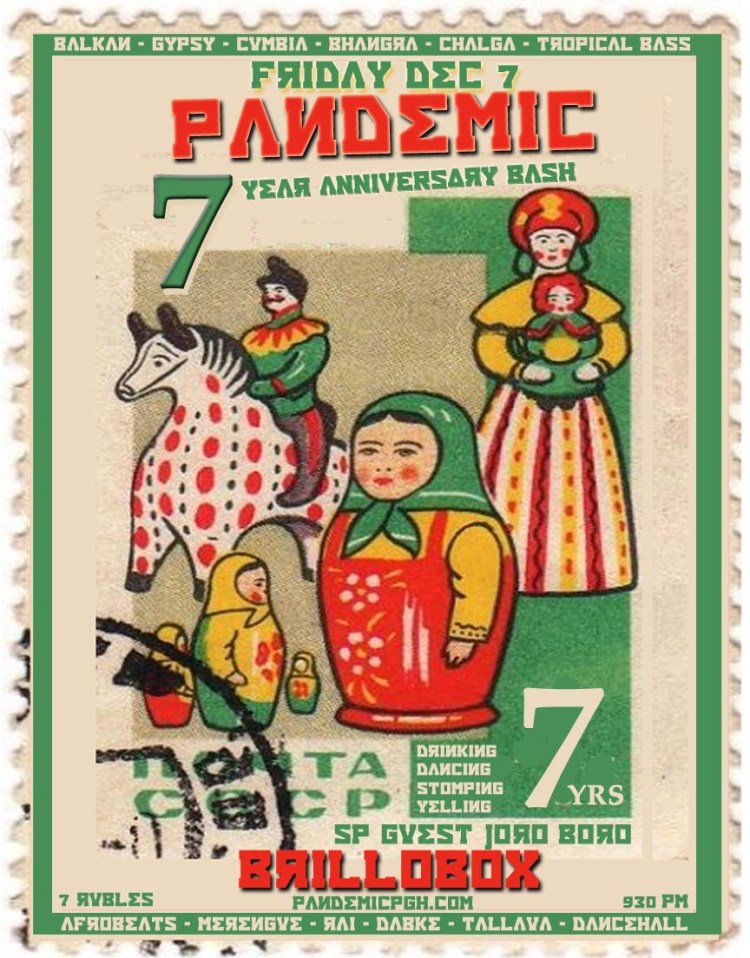