The Return of NYC’s

SLAVIC SOUL PARTY
A fiery 9 piece balkan brass band that has set Gooski’s on fire multiple times. It’s been too long since they have been in the burgh. SSP are excited to be back and playing at their favorite little bar in Polish Hill…GOOSKI’s

and DJ sets before between and after by PANDEMIC 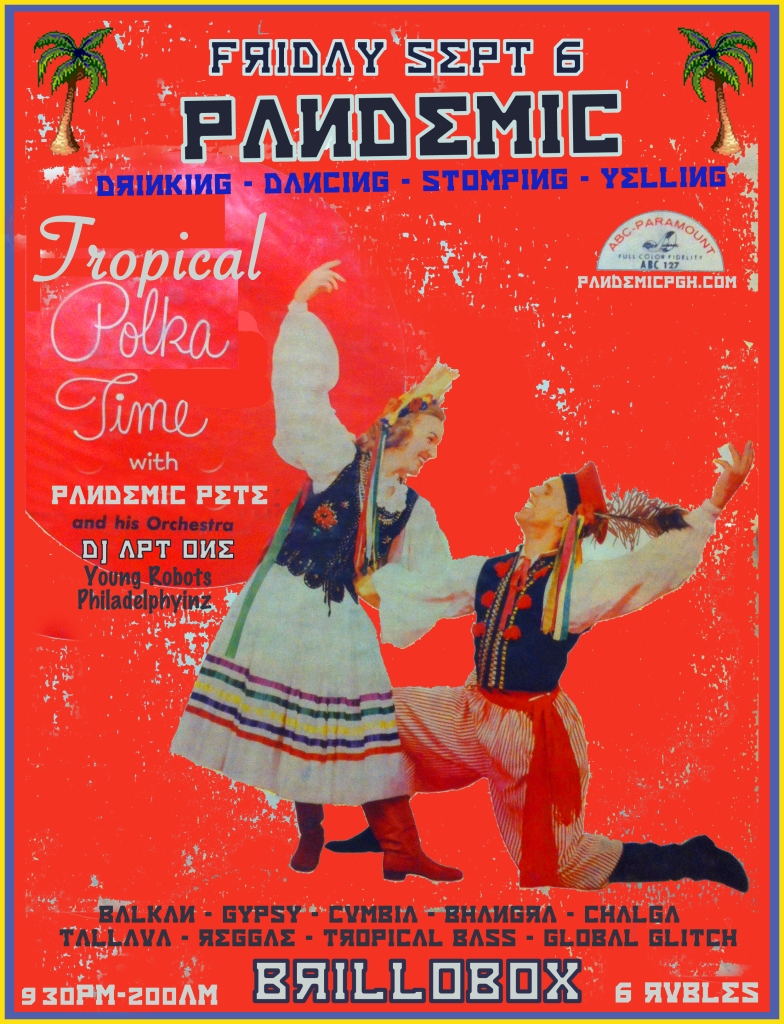 Friday Sept 6,
PANDEMIC ::: w/ Special Guest DJ APT ONE
Philly native, Pittsburgh Born DJ APT ONE will join PANDEMIC PETE for the Sept Edition of PANDEMICGLOBAL SOUND SYSTEM.  Together they will blending tracks from around the world into a tropical storm of sound.
Tropical Moombahton, 8 bit Cumbia, Balkan Ghettotech, Global Glitch, Brass and Bass, Dirty Chalgaton, Gypsy Beats, Bhangra, Bollywood Bass and much more. We will see you on the Dancefloor.
Brillobox
4104 Penn Ave
Pittsburgh, PA 15224
$6
www.pandemicpgh.com
www.youngrobots.com
more about DJ APT ONE…

DJ Apt One is and has been on the forefront of many important movements in dance music over the last ten years. With his signature funk-influenced style, he has left his mark across the musical spectrum.

He was a part of the multi-genre style of DJing that catapulted his adopted Philadelphia to the pinnacle of the DJ world in the early 2000s. His years of seasoning as a DJ have seen him play all styles imaginable all across the US and Europe.

As a part of the duo RCMP, his work foreshadowed the emergence of Nu-Disco before the genre even had a name.

He is an internationally renowned disco edit-maker, appearing on compilations alongside the likes of Todd Terje and Tom Moulton. He has officially remixed global stars as diverse as Wiz Khalifa and Gregor Salto.

He is also is one of the OGs of “Moombahton” – the polyglot global EDM movement that saw DJ Apt One find fame on the BBC, NPR and elsewhere along with pioneers Dave Nada, DJ Sabo, Dillon Francis and more.

He is also a founder and executive of Young Robots Records.