For the sake of clarity..

THIS SHOW WILL COST MORE THAN $7000 to put together. Why?

The band is flying from Peru to Pittsburgh.
We have hotels, food, equipment rentals, sound, venue, and more to pay for.

Any proceeds will go to Puerto Rican relief funds. Please contribute more than $15 if you can.
https://www.indiegogo.com/projects/los-wemblers-de-iquitos-in-pittsburgh-music-community#/

THIS IS GOING TO BE A HISTORIC EVENT!!!

Los Wemblers —- Cumbia amazonicá pioneers from Peru for the first US show of their first-ever world tour.

Formed in 1968 in Iquitos, Peru, Los Wembler’s pioneered a unique style of music that combined cumbia rhythms, electric guitars, and psychedelic sounds. Their 1971 LP, Al Ritmo de Los Wembler’s, pushed the regional sound of chicha (cumbia rhythms combined with Andean folk melodies) to new levels. This new sound took the name cumbia amazonicá, after the first track on Al Ritmos, and it shaped andean popular music for decades. Even at their height of popularity, Los Wembler’s performed only in their hometown of Iquitos and neighboring areas, with rare performances in neighboring Bolivia, Chile, Colombia, and Ecuador.  By the early 1980s, Los Wembler’s faded into the background as the popularity cumbia amazonicá gave way to newer electronic cumbia sounds. Los Wemblers never stopped playing, but stayed in Iquitos playing the occasional party, wedding, or community events. In the early 2000s, cumbia amazonicá was rediscovered as a missing link between traditional cumbia and a new generation of musicians in Argentina, Mexico and Colombia. In 2007, Barbès Records released Roots of Chicha: Psychedelic Cumbias from Peru and Los Wembler’s were rediscovered. In 2011, they performed in Lima for the first time in twenty-five years. A new generation of tropical electronic musicians looked to them for inspiration and the Peruvian group Dengue Dengue Dengue collaborated with them. In 2015, the Smithsonian invited Los Wembler’s to perform at the Folklife Festival in Washington DC.

Los Wembler’s haven’t lost any of their creative edge. Watching them perform or record is to witness musicians at the height of their powers. Their happy first experiments with cumbia and indigenous rhythms were not the product of chance. These are accomplished musicians in tune with their environment but also infinitely curious about the world. They may have a fondness for 1970’s production values, but after all, so do Jack White and Daptone. The style Los Wembler’s created more than forty years ago has finally found an audience around the world, and Los Wembler’s intend to keep it relevant by finding new ways to experiment.

Catch them in Pittsburgh for the first show on their first world tour.

We are still putting together the details and confirming the show. But looks like Black Bear Combo the fiery balkan group from Chicago will be playing here on Thursday 3/9 w/ local Homing.  More to come. Stay tuned.

Got a lot on the plate coming into 2014.  I’ll be updating the page regularly over the next couple weeks so come back for more info, new mixes, etc…. 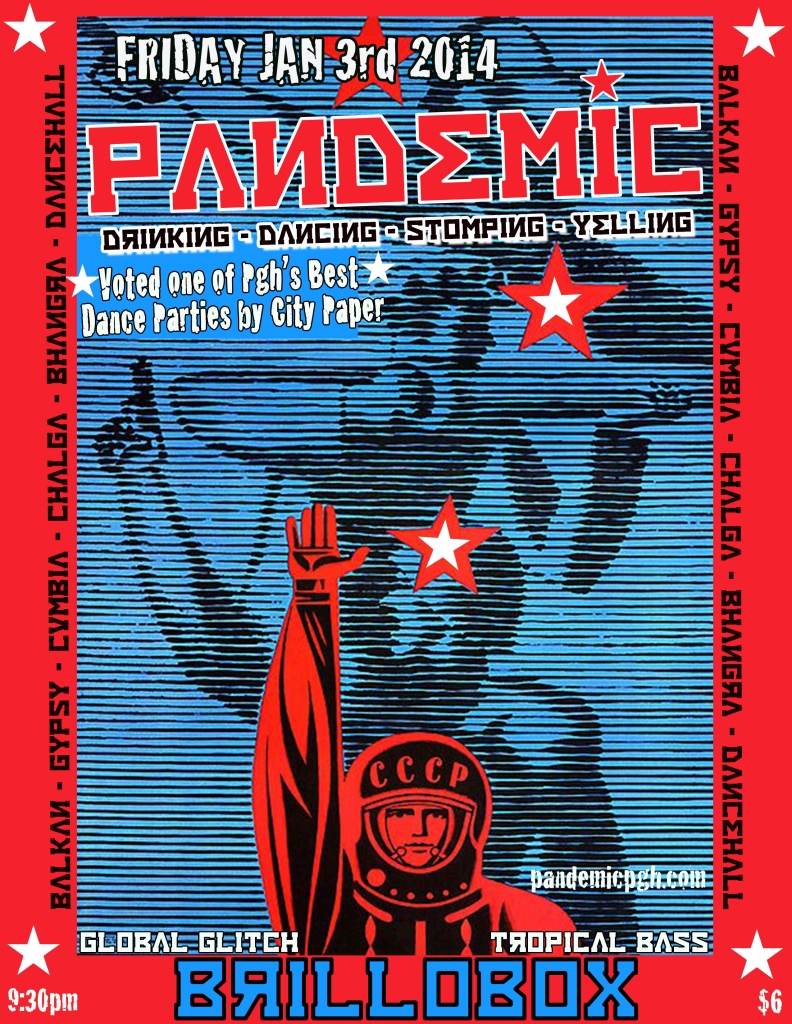 First things first. I am djin 2 events on NYE.. My last set of 2013 will be a benefit at FREE RIDE

Celebrate the new year in style at Free Ride…Plus help us raise funds for a good cause!

Featuring 6 Dj’s, tons of music from here and around the world, and our very own food truck serving you delicious mexican inspired cuisine!

Proceeds will go to benefit a free kindergarten for Roma(gypsy) children in need in Serbia! (check it out here: Little Friends https://www.facebook.com/groups/196536097178362/)