5 extremely hot programs about to hit Pittsburgh as the February snow continues to fall. Pandemic and Pittonkatonk are about to drop a global heat wave on our city unlike any other. #globalwarming – DJ SMI (pandemic, afroheat, beleza, etc).

We are excited to be producing events independently as well as collaboratively with the Consortium and Andy Warhol Museum, Whats up? 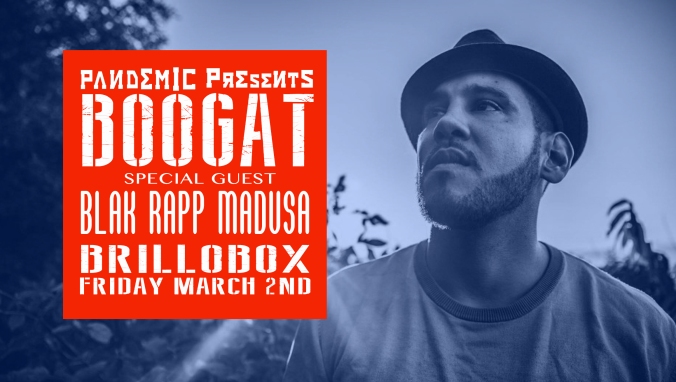 4 hours of non stop global dancehall and the return of Boogat. His music blends elements of Hip Hop, Cumbia, Salsa and Reggaeton.

more about Boogat below TIX or FACEBOOK EVENT PAGE

Boogát is a Canadian-Mexican musician from Montreal, blending hip-hop with Latin Music styles such as Cumbia, Salsa and Reggaeton. His album ”Neo-Reconquista” won the Juno and Félix award for ”World Music Album of the Year” at the 2016 Juno Awards and the ADISQ gala, , respectively.
The son of immigrant parents from Paraguay and Mexico, he was born in the city of Québec and raised in the Beauport borough of the city. In 2001, he moved to Montréal where his career started.
Singing first in French, Boogát moved to Spanish after playing with the electronic music producer Poirier and the Latin music group Roberto Lopez Project; discovering a new world of possibilities that opened the way to collaborate with artists such as La Yegros, Uproot Andy, El Hijo De La Cumbia, El Dusty, Lido Pimienta, G-Flux, Super San, Mati Zundel, Kid Koala, Poirier, Pierre Kwenders, Radio Radio and El Remolon, amongst others. 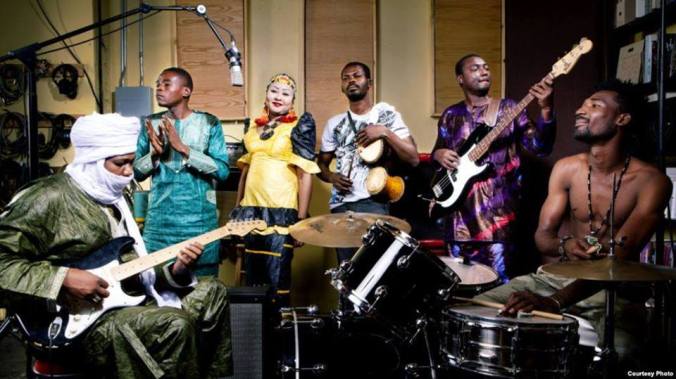 The Consortium and Pandemic present the return of the amazing
band from Niamey, Niger TAL NATIONAL  http://talnational.com/

You loved them in 2015 at the Thunderbird, and now they’re back, celebrating the release of Tantabara, their 3rd album on Fat Cat Records out Feb 9, 2018.  https://talnational.bandcamp.com/

Tal National are a self-described “rock band,” though their vision of rock may push well past what the West fences in around that term, and guitarist Almeida finds as much inspiration in trance as he does in rock’s embrace. The grooves are the backbone of the album, and the intent is to create a trance-state that overwhelms conscious thought and lets the listener be surrounded by the energy and emotion of Tal National. Brimming with the band’s complex, intense spirit, the album is a continuation of the balance of tradition and innovation that have driven their previous albums. It’s a joyous celebration and euphoric epiphany all in one complex package. We’d expect nothing less at this point from Tal National.

Pittonkatonk fundraiser in partnership with the University Of Pittsburgh Carpathian Ensemble.

About WPO
With a line-up of Philadelphia musicians whose influences range from Sun Ra to Bulgarian brass bands, West Philadelphia Orchestra is a unique live ensemble in today’s auto-tuned musical world. They began playing Romanian ballads, Macedonian folk-dance songs, Bulgarian wedding music, and Klezmer in late 2006, and have continued expanding their repertoire of Eastern European music. The band also plays original tunes which blend other sounds, like jazz and classical, together with traditional Balkan sounds. As much a community as a band, WPO’s performances are celebratory events. With blistering beats and walls of brass, they inspire audiences to hold hands, gyrate, howl, and otherwise slip the yoke of the homogenized culture industry.

We welcome singer/songwriter, Fatoumata Diawara (aka Fatou), who is originally from Mali and currently residing in France. Her much anticipated spring 2018 record will follow-up on her critically acclaimed debut album “Fatou” (2011) on World Circuit/Nonesuch Records, which was the No.1 album on the world music charts for six months in 2011. Fatou has collaborated with a wide array of musicians including Damon Albarn, Toumani Diabaté, Herbie Hancock and John Paul Jones, and she was featured in the recent documentary film, Mali Blues.

This event is co-presented with Carnegie Nexus as part of its 2018 event series, “Becoming Migrant… what moves you?” and PANDEMIC.

About Pittonkatonk
Pittonkatonk is a grassroots, volunteer-run social and environmental justice organization that promotes creativity and critical thought by way of music making and participatory events in and around the Pittsburgh Area. Pittonkatonk established itself as a free community event in 2014 by inviting local and national community brass bands, street performers, and activists to convene in a May Day celebration. The annual Brass BBQ held the first saturday of May encourages participants to engage in making the event happen through bringing shared food dishes (POTLUCK), volunteering to run the event, hosting traveling musicians, promoting the event, and performance.

Detroit Party Marching Band (Detroit)
– too punk for a bio

Mdou Moctar (Niger)
– Mdou Moctar hails from Abalak, in the Azawagh desert of Niger. One of the few original singer/songwriters willing to experiment and push the boundaries of the genre.

This year we have the addition of a Community Resource Tent
more details TBA.