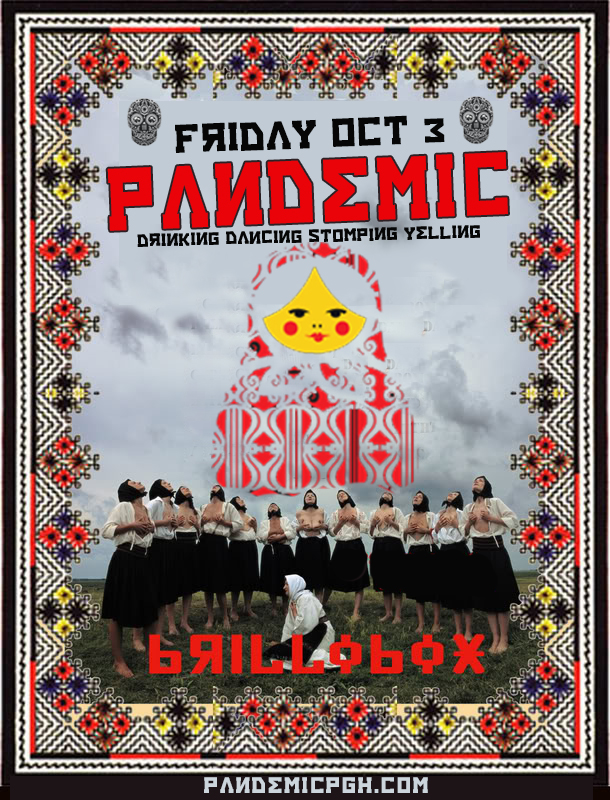 PANDEMIC was voted one of Pittsburgh Best Dance Party by Pittsburgh City Paper Readers and had continuously brought over 8 years of DRINKING DANCING STOMPING YELLING to the Brillobox. There aren’t many other parties that jump genres, blend contemporary dance music w/ traditional folk music all on one dance floor. If you are looking to travel around the world in a night this is the party for you.

PANDEMIC, CONSORTIUM in partnership w/ VIA and more present…

Since 1961, the small town of Guca in Central Serbia has been the venue for the annual “Festival of Brass Music”, a competition to determine the best Brass musicians on Earth, attracting over 300.000 people every year. The Boban Markovic Orkestar used to be among the winners every time, receiving the “best orchestra” award in 2000 as well as “best trumpet” for the maestro himself in 2001 – his 5th PERSONAL win. Since then, Boban decided not to compete any more, but simply performs as an honoured guest. He’s the undisputed King of Balkan Brass music
Now he is honoured even further afield, reaching an international audience through his musical contributions to films by Emir Kusturica, and taking his frenetic and funky blend of Balkan and Gypsy roots touring around the globe, a guaranteed sensation at any wedding, open-air-festival, music academy, classical concert or impromptu street-party of your choice.

According to tradition, Boban officially handed over the Orkestar to his son and successor Marko, on his 18th birthday in 2006. Marko was given a trumpet as a toddler and started to receive lessons from Boban’s father when he was 9. At 13 he was in the studio for the first time, at 14 he joined Boban’s Orkestar. At 16 he became lead soloist and started arranging for the band. Now he is the featured soloist on Boban’s latest CD “The Promise”.
In 2006, Marko also appeared as the leading actor in the film “Gucha Distant Trumpet”, directed by Dusan Milic & produced by Emir Kusturica. Marko plays a young Romeo who falls in love with a Serbian Juliana as music and racial tensions intertwine in this dramatic Balkan epic. 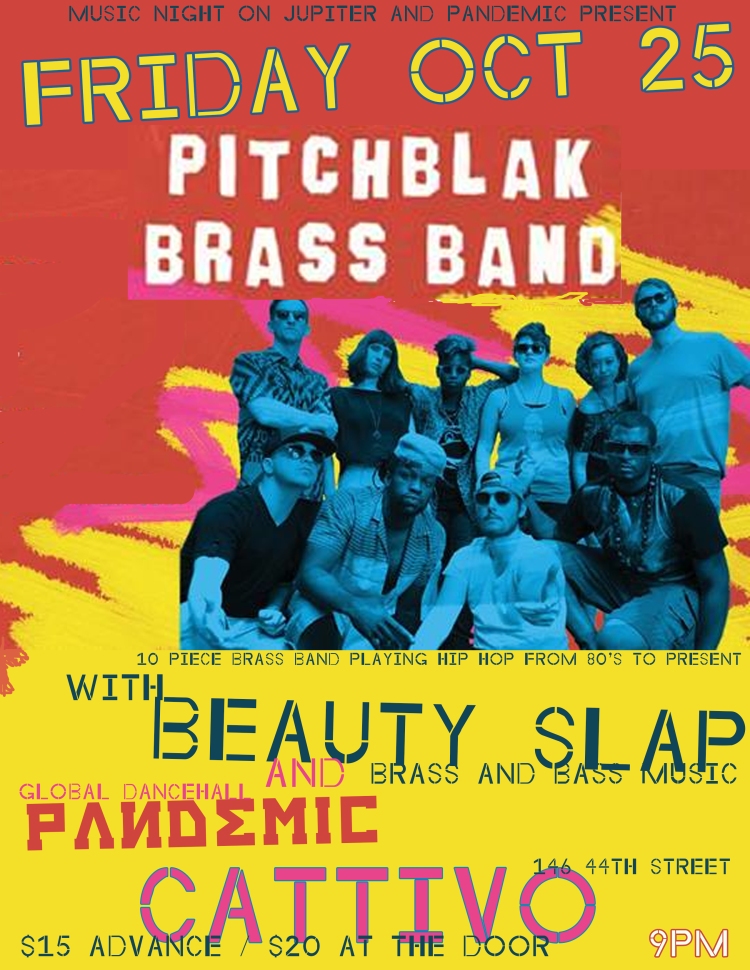 Music Night On Jupiter and Pandemic are bringing PitchBlak Brass Band back to Pittsburgh!

With special guests Beauty Slap, and DJ sets by Pandemic.

The debut of PitchBlak Brass Band in Pittsburgh last May was so much hot, sweaty fun, we had to do it again. Only in a much larger room! If you were with us, you know why – the place was packed full and the whole building was bouncing. We are going to use the same recipe for success – Pandemic, local brass and PitchBlak – but with a lot more room to move. And you will move. Ask anyone who was with us last time. It may be physically impossible to stand still when PitchBlak is performing.

More about the band:

PitchBlak Brass Band is a Brooklyn-based 10-piece band whose style and sound represents hip-hop from the 1980s to present day. A collective of young musicians, composers and artists, PitchBlak embodies the contemporary and vibrant undercurrents of New York City. PitchBlak’s members have incredibly diverse musical backgrounds, allowing them to infuse hip-hop driven music with anything under the sun.

PitchBlak released its debut album, You See Us, in fall 2013.