Ladies and Germs the season of brass is upon us.  I have awesome shows coming down the pike. First and foremost PITTONKATONK A MAY DAY BRASS BBQ.  A free event that is open to everyone.  The event is being held at the Vietnam Veterans Pavilion in Schenley Park and includes over 100 musicians from far and wide. We do have an INDIEGOGO that you can contribute to that will help recoup costs. And believe me there are more than the initial $3000 in bills to pay.

also sp guest BOOGAT at May 2nd Friday Pandemic w/ special guests that you’ll have to come and see.

BOOGAT is  a young talented MC living in Montreal and bridging latin groove with urban and electronic music while telling everyday life stories with catchy hooks and sometimes goofy lyrics. He also can be moving like in the very evocative «Cumbia De Las Luchas» where Juan choose to sign-up for the army and fight in Iraq to get his green card.  His most recent album, El Dorado Sunset,  got him two« Félix» at the 2013 ADISQ awards for best world music album and best producer. During the last 3 years, Boogat also released 3 free mixtapes, 1 EP and many collaborations with musicians from all around the world. His song El Alto De La Paz with Mati Zundel got synched to the groundbreaking TV show Homeland.
His explosive live show will turn any situation into a party for both the latin fans and a larger audience. Boogat is skillful in creating a connection and communicating with the audience during his shows where he plays his repertoire with a percussionist, a drummer and trombone player. Boogat and his band already played some major international festivals like Montreal Jazz Fest, Toronto Small World Music Festival or Sonar Festival in Barcelona and a series of concerts in the USA, Mexico  and France.

PitchBlak Brass Band is a Brooklyn-based 10-piece band whose style and sound represents hip-hop from the 1980s to present day. A collective of young musicians, composers and artists, PitchBlak embodies the contemporary and vibrant undercurrents of New York City. PitchBlak’s members have incredibly diverse musical backgrounds, allowing them to infuse hip-hop driven music with anything under the sun.

PitchBlak released its debut album, You See Us, in fall 2013. 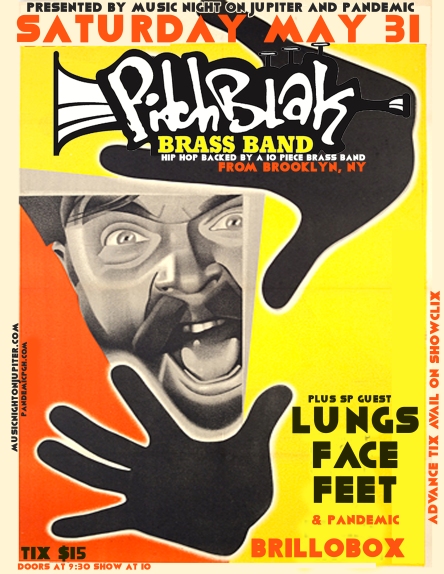