MAY DAY BRASS FEST is happening. I’m still getting all the logistics together and could use some support. I have a partial fiscal sponsor but need a little more to make this happen. feel free to donate what you can. http://igg.me/at/pghbrassfest/x/5318844 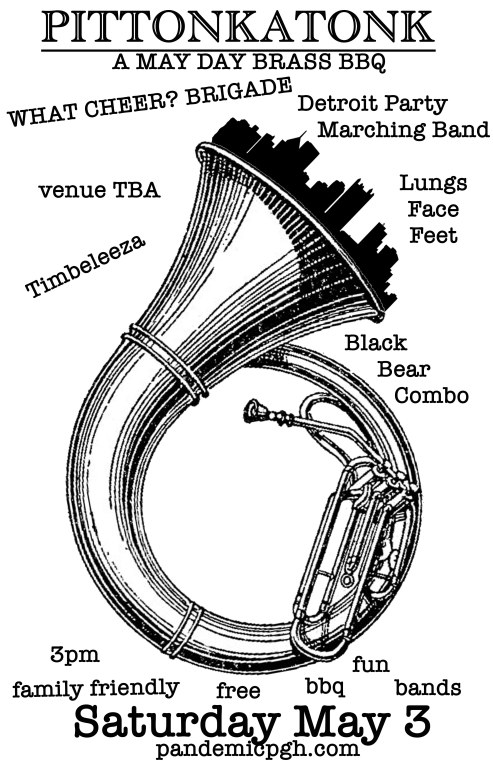 After a killer party w/ Isa GT we are kicking off spring w/ some even more awesome events. 2 dj parties and 2 live band events. Click the images for the Facebook event pages etc. also follow on twitter @Pandemicpgh and download free mix tapes on sound cloud.

April 4 Pandemic is back at the Brillobox. It’s gonna be a balkan explosion, but not to worry I’ll still drop plenty of tropical bass, bhangra, bollywood, cumbia, and anything else that i stumble across that’s interesting.

Then April 5 welcoming to Pittsburgh for the first time of the PELIGROSA CREW…DJ Orion and King Louie from Austin, TX at the Round Corner Cantina….

and more info to come on future events…

APRIL 5 I’m opening for some heavy hitters in the latin bass world. Check out http://www.peligrosablog.com and click flier for link to fb page

Lonesome Leash (aka Walt McClements, a touring member and collaborator of Dark Dark Dark, and also a member of punk orchestra Why Are We Building Such a Big Ship? and New Orleans’ Panorama Jazz Band) is releasing his debut album, I am No Captain, on January 1. It’s a freaky, folky album that should appeal to people who like their Decemberists/Mountain Goats cut with a little Gypsy flavor. He recently revealed the first single, “Ghosts,” and we’ve now got another album cut for you, the appropriately titled “Feeding Frenzy,” which is making its premiere in this post. You can stream both of those below.

THEN THE RETURN OF RAYA BRASS BAND
SATURDAY APRIL 19 @ BRILLOBOX

Since 2008 Raya Brass Band has thrilled audiences with its energetic brand of soul shaking, border defying dance music. Given the way these five musicians electrify clubs, festivals, underground parties, and even subway cars with their riotous performances, it’s no wonder that they’re often mistaken for a band twice the size. The members of the band all bring their unique voices to the group, creating a sound informed as much by their love for the fierce and seductive music of the Balkans as it is by New Orleans brass bands, punk rock, out jazz, and a host of other international sounds. When they put it all together, this hard working band gets straight to the point, dancing, sweating, and shouting alongside its audience.

Raya Brass Band has performed at Lincoln Center Out of Doors, Shakespeare in the Park, and the New York Gypsy Festival. The band’s music has appeared on NPR’s Radiolab and Public Radio International’s “The World.”

“Watch as five people conjure a massive party around them. Then see if you can resist the temptation to get up and start dancing. It’s pretty unlikely.”—Pop Matters

Lungs Face Feet is a 8 piece brass, accordion and percussion band from Pittsburgh, PA that began in 2010 with friends from Mexico playing raw cumbia. We have since been pursuing our own blend of energetic sounds influenced by cumbia, oddities, cooked and uncooked fish and whatever keeps us honest. We play inside, outside, on the street and wherever people gather to enjoy their community. We perform, write and collaborate striving to make the music living, inclusive and true to our feelings as working people.